According to a research paper published in Fitness management magazine way back in 1998, not very.

I was digging through my pile of fitness and health clippings and unearthed this very telling graph. 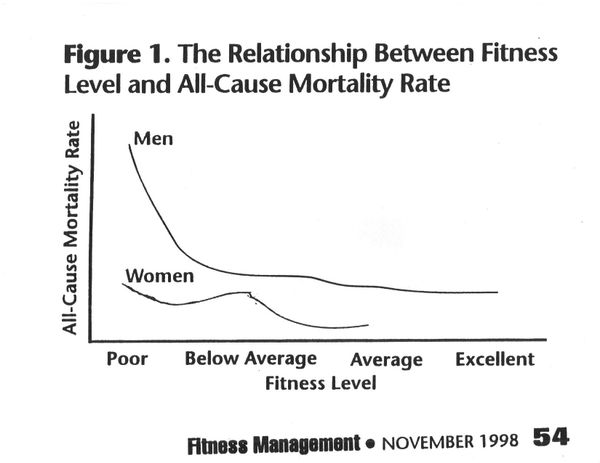 I wish I’d saved the magazine but alas I’ve long since tossed it into the recycling bin.

If you look you’ll see that once you hit a BELOW average level of fitness you’ve done most of what you need to do to survive longer. Once you hit an average level, any more does you little good.

For women, that little bump in the below average road is interesting – that as you get a bit better than below average you get worse. Who knows.

So the idea that the smug person jogging by you everyday on your way to work is healthier than you or that your gloating friend who’s hits the gym daily will live longer than you is poppycock.

A reasonable level of fitness is all you need.

And remember, research also reveals that as little as 2, 15-20 minute strength training sessions a WEEK is all that is required of you to get every itty bitty health benefit you need that exercise can bestow.

So, hit the iron folks!

A client said to me the other day.

"What about it?" I replied, as politely as humanly possible as I was about to blow a gasket.

This question is so common in my gym that comparatively, the preschool question "Why?" sounds as rare as Putijarra. (The world’s rarest language. What – didn’t you know that?!)

"Look!" my client says, poking her substantial middle with her manicured finger.

She thought about that for a second – actually several seconds, and as she did, I looked over the notes in my client chart to see how she did in her last session.

"I don’t know." she said, mascara aflutter. "Lack of exercise? I used to do Yoga!"

"Where did you eat dinner last night?" I said sounding exactly like Sgt. Friday.

Instantly I got an expanded Zagat’s report of a French restaurant on the upper east side that would have me refinancing my home to eat at. Great review, but she was missing the point – ENTIRELY.

"Do you go there or to places like this often?"

Another colorful review began. I squelched it swiftly.  OK no more parables.

Janice (we’ll call her Janice), you’re fat because you eat too much food and the wrong kind of food too often.

Mascara un-aflutter. If she had a bat, I’d have been a ball.

It really amazes me how many people think that the excess fat their bodies have created comes from lack of exercising. And since it does of course, exercising is the only way to get rid of it.

Think of the logic – or the lack thereof.

So I said to Janice before being cremated, "It’s not lack of exercise that put the fat there in the first place. It’s what you’ve been putting into your body."

I saw the lights come on. I felt her absorb the concept and was pleased that I had managed to redirect her thinking which is the first and most important step to body transformation. Just doing what I say is OK but really ‘getting it,’ as they say in EST, is the top of the mountain.

Zen Eating – Flabby Thoughts Flabby Body should be my next book.

"OK Janice now that we’ve solved Rubik’s fat cube, let’s go get your Burn on!" A phrase one of our instructor’s Tommy Day coined for a Slow Burn workout.

"Can we do the ab machine first?!"

Intermittent fasting as many of you know from previous posts has proven positive health benefits. But so does intermittent exercise.

IE is a term I’m coining (well one of our instructors Eugene really thought it up) to describe the type of exercise that Slow Burn is as well as other forms of high intensity exercise (HIT for short).

IE in many ways mimics the process by which IF enhances health. IFing, as I call it when I’m doing it, allows the body to take a rest and recuperate form it’s hard work. Eating and digesting is hard work on the body and though it gives us life, it takes it’s toll.

Ya can’t get something for nothing.

IEing is a way to allow for the same. By allowing for adequate rest and recovery, the body will reward us with better health, strength and vitality.

Remember, exercise is a stressor – and though it gives us a health, it takes it’s toll too.

IFIE may sound iffy, but give it a try and you may just feel spiffy.

I saw this in today’s Daily News so it MUST be true:

And you can achieve this in one way and one way only – strength training!