One of my favorite times of the year is here again. And once again, my family Thanksgiving table will NOT have placed upon it one iota of fake, grain-ridden, fraken-foods that so many people year after year “enjoy.” Celebrating a holiday with loved ones is not the time for going face down in the foods that require a bucket of Tums to neutralize. In fact, it is my opinion that it is time for the exact opposite to happen in your family. Its a time to enjoy only the most healthful foods that money can buy.

Let me ask you all a question – if you ran out of pet food, would you ever feed your dog or cat a bowl of Quaker Oats instead? How about cereal – would you place a bowl of breakfast cereal like Wheat Chex or Captain Crunch down on the ground for your best friend to eat? Pancakes? Waffles? Pop-tarts?

So why then do you feed this stuff to your kids? (Yes my parents were guilty as charged too.)

Human behavior is really interesting. We do all sorts of things to ourselves and to our loved ones that are harmful without the slightest thought. Halloween candy? Sure! (But just not too much we warn, as if even one candy bar isn’t too much.) The irony: You get livid at your teenager for smoking a cigarette, when for the past 13 years of her life you’ve fed her foods that have harmed her health to a far greater extent than that one silly smoke.

I feel as if most of us are walking in our sleep when it comes to nutrition. 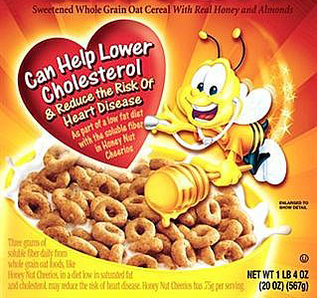 We blindly accept this Cheerios heart healthy symbol without stopping to think that the entire idea of it completely nuts. So why do we believe such nonsense? Why do we believe that whole wheat bread is healthy and white bread is evil? Are we really this dim-witted?

Of course not. So what is going on? Marketing you say? C’mon. Do you think even the largest and wealthiest companies could ever market you into believing that eating a medley of wood and metal flakes sprinkled with sugar and salt was healthful?

Make this years Thanksgiving a true giving and only put on your table foods that nourish. Make every dish a dish of love that harms not. Splurge for a free-range Turkey. Make a wonderful salad with roasted pine nuts and cranberries instead of mashed instant white potatoes. Or if you must have potatoes, mash real yams. Load it up with grass-fed butter and raw cream instead of marshmallows (that’s what my mom put on our potatoes).

“It’s tradition!” you shout. Tough noogies, say I. You’re afraid you’re going to hurt grandma’s feelings if you don’t eat her gluten-ridden gravy on top of her wheat-encrusted stuffing? You’re health is far more important than her feelings about her stuffing. And when you explain to her what you know about such foods and the reason why you just cannot eat them, she just might surprise you next year. In fact I know she will.

You could also share this recipe for gluten/wheat free stuffing.

Happy Thanksgiving to you all and safe travels! I’d love to hear what you changed this year to make your turkey-day healthier!

Alright already! Here’s how my wife makes it. I can tell you this – if you are not making your own stock and drinking a cup a day with a pinch of salt, you have no idea what you are missing!

Making good tasting stock is a fairly imprecise endeavor. I don’t measure anything or weigh anything. I just throw stuff into a pot and simmer for 24 hours or so.

Whatever bones you want to use – I stick with (truly) pastured raised chicken carcasses (backs, necks, feet) and/or turkey parts. I’ll use duck bones too if I can get them at the farmer’s market (yummy stock). I will also use bones from (truly) grass fed cows and lamb, but I don’t like it as much as the poultry bones – comes out rather gamy tasting and can be made to make great stews and soups, but I like it less for just straight drinking.

Chicken feet make the richest stock. This stock seems to confer the greatest joint pain-relief benefit to Fred and maybe because there are so many joints in a chicken foot. I get them from a farm upstate, but I think you can get them at the Union Sq. farmer’s market.

Rinse the bones, especially if they are left over from a meal you already had (you can save up bones and carcasses in the freezer) — you want to make sure you’re not adding any salt to the stock. Trim the nails off the chicken feet (I use poultry sheers) and cut off any gross calluses or any other dirty looking parts (not sure if you really have to, but those parts gross me out). You can mix and match bones too – sometimes adding poultry bones to the beef or lamb, tones down the gamy flavor. Pork bones also make a great tasting, almost Asian tasting broth.

How many bones to use? It depends on how much stock you want. After you put them in the pot (I loosely fill my 15 qt. pot half way up with bones/feet) you will cover them with water so that they are submerged with an inch or so over the bones.

Then I add one or two ribs of celery – rinsed and cut into 3 pieces.

One or two medium sized carrots, scrubbed and cut into 3 pieces.

And one medium onion, peeled and quartered. If I have a bunch of parsley I will rinse it off and throw it in. I will also put in any leftover veggies in my veg. drawer as long as they don’t impart too much of a flavor – like broccoli and cauliflower (I throw in the rinsed greens that often get thrown away). I won’t throw in a bitter green, because I don’t know how it will affect the taste, greens like chard are fine. But the veggies are not necessary.

IMPORTANT: Add 1/4 cup organic, unfiltered APPLE CIDER VINEGAR to the pot. It won’t affect the flavor, but it will help leach all the minerals from the bones. DO NOT add salt – salt does the opposite.

The celery, carrot, onion combo is classic in stock-making. So I always use those, but I don’t care too much about the proportions (though some might say I should).

Then I bring the whole thing to a boil. Once it’s boiling, I might skim the “scum” that starts forming if there is a lot of it, but most times I don’t — it just goes away eventually. Then I put the lid on it, turn down to a simmer and let it simmer for 12 – 24 hours — the best stock has gone 24. It really should be just barely bubbling.

The next day there should be a layer of fat on the top. I skim that off and discard (not because I’m fat phobic, but because poultry fat gets damaged in the long cooking process). Then I store in half cup portions (in glass containers) and stick in the freezer. It’ll be rather concentrated, so when you thaw it out to drink, you add equal parts water to it. At this point you can add a pinch of salt if you want.

Enjoy! And give the kids some too!

I was contacted yesterday by someone who asked me the following question:

I just wanted to say that I heard you on Jimmy Moore’s podcast, bought your book, and I’ve been doing slow burn for a couple of weeks now and have already started seeing results. I am 44 and concerned about getting injured, so I think your method is perfect for me.

I have a question regarding my wife. She is in good shape by appearances, but admits that her muscles are weak and could use some strength training. But she has a concern with doing the leg press or knee extensions. She has some joint issues (particularly in the knees), and a physical therapist once told her that no one should ever do a knee extension, as it is really bad for that joint. She is also concerned about squats and presses. Do you have any advice about how she can strengthen her legs without hurting her knees?

Thanks so much for your help!

I just hate these physical therapists. Well, hate’s the wrong word – despise is closer to it.

Let’s get down to it here – no matter what strengthening exercise you do HOW you do it matters. I think we can all agree that fast and explosive movements on ANY exercise machine or free weight exercise using challenging weight loads is a recipe for disaster. If you don’t agree with this, hit your back button and follow the election results.

Instead of flinging your limbs around like a rag doll when lifting weights, slow and controlled movements impart a much lower degree of force without compromising gains in muscle tissue – the ultimate goal of weight lifting for health and fitness.

Here’s a video showing some guy doing them wrong:

Here’s me doing a very heavy set of knee extensions (heavy for ME that is) a couple of years ago. Bear in mind that I have severe knee arthritis due to 25 years of Karate, jogging, etc. and perrform this exercise with ZERO knee discomfort.

Also bear in mind that I always train myself, so, you’ll see some questionable exercise form. Bear further in mind that I was a little tubby then from rice and sweet potatoes creeping into my life. I was trying to carb up a bit to increase muscle fullness and it resulted instead in a fat gut. Lesson learned.

For people with knee issues, I’d advise a rep range of 6-12 repetitions. This keeps the weight a bit lighter.

Now, some therapists and personal trainers will argue that the exercise isn’t “functional.” They claim that we don’t use our legs in this fashion in real life, meaning, we don’t extend our knees against resistance while sitting on a chair. My answer: So what? The issue is the strength of the quadriceps and nothing more. Do these therapists think that if I make Mrs. Smiths quads 50% stronger by making her quads more muscular they will look nice but won’t function any better?

They also claim that it puts undue pressure on the kneecap forcing it to crush up against the femur causing compression and potentially injury. But of course, these same therapists go out for their morning jog. The reason for knee injury when doing leg extensions is not due to the exercise itself. It is due to HOW you perform it.

You can’t jog carefully and slowly. If you put a chimp behind the wheel of a car and it crashes, don’t blame the car.

As the saying goes, slow and steady wins the race. Your thoughts?