Now tell me, what did you have to eat today? 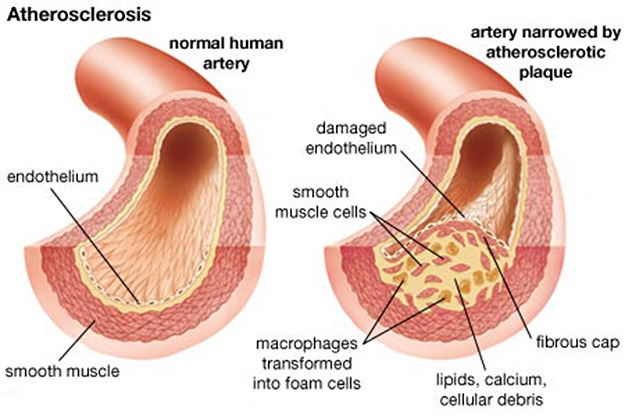 I was thinking about how self-proclaimed nutritional experts like Dr. Oz, Dr. Ornish, Dr. McDougall, Dr. Greger, and others of their ilk, have declared a war on fat and cholesterol. They claim that by eating foods rich in saturated fats and cholesterol, we risk clogging our arteries and suffering from heart attacks and strokes.

But if the hypothesis is true – that eating cholesterol and fat goes straight to your arteries and deposits there, what about good-old calcium? Much of what makes up arterial plaque (the stuff that is found in clogged arteries), is calcium. So, why haven’t we declared war on calcium?

Plaque that accumulates on the inner walls of your arteries is made from various substances that circulate in your blood. These include calcium, fat, cholesterol,…

Why haven’t the experts cried out against eating broccoli and kale as they have against eating red meat and butter? How did this fact get missed by the authorities? No wonder why our collective reduction of red meat and saturated fat consumption has failed to reduce heart disease. Our increase in green-leafy vegetable consumption has off set this!

Thankfully it came to me in a flash this morning so, if everyone shares this blog it just might go viral and save millions from artery-clogging calcium.

So please, if any of you care about your fellow man, share this blog post, warn people to stop eating green leafy vegetables and let’s get the war against calcium started.

In a recent paper on the role of mitochondria and type II diabetes, the researchers conclude that:

Under certain insulin-resistant conditions, reduced oxidative phosphorylation capacity, submaximal ADP-stimulated oxidative phosphorylation and/or content of mitochondria have been observed in insulin-responsive tissues, such as skeletal muscle, liver and heart. Impaired mitochondrial plasticity, that is, response to metabolic regulation, seems to be characteristic of many insulin-resistant patient groups. Whereas inherited mitochondrial abnormalities have been associated with insulin resistance, acquired metabolic alterations typical of insulin resistance, such as hyperglycemia, hyperinsulinemia and hypertriglyceridemia, can also promote the production of ROS and damage mitochondria in insulin-responsive tissues. Of note, some successful interventions to decrease insulin resistance also improve features of mitochondria, making these organelles attractive candidates for novel therapeutic approaches.

In other words, it’s better to have as much mitochondria as you can get. But what are these little gadgets called mitochondria?

In cell biology, a mitochondrion (plural mitochondria) is a membrane-enclosed organelle found in most eukaryotic cells.[1] These organelles range from 0.5 to 1.0 micrometer (μm) in diameter. Mitochondria are sometimes described as “cellular power plants” because they generate most of the cell’s supply of adenosine triphosphate (ATP), used as a source of chemical energy.[2] In addition to supplying cellular energy, mitochondria are involved in a range of other processes, such as signaling, cellular differentiation, cell death, as well as the control of the cell cycle and cell growth.[3] Mitochondria have been implicated in several human diseases, including mitochondrial disorders[4] and cardiac dysfunction,[5] and may play a role in the aging process. The word mitochondrion comes from the Greek μίτος mitos, thread, + χονδρίον chondrion, granule.

In other words, they are the little power-producing pac men within your muscles. Important little dudes to be sure.

Now, what is one of the best ways to go about increasing the total number of these gizmos so that you can enjoy more ATP meaning, energy, insulin sensitivity and a host of other metabolic goodies?

Several studies on resistance training have been shown to significantly increase the total amount of mitochondria within the skeletal muscles. One in particular, “SuperSlow or Hypertrophy Resistance Training: do they affect skeletal muscle mass and strength differently?”, showed a significant increase. Their findings:

The myofibrillar content of type I muscle fibres declines with both modes of resistance training (thereby to a greater extent with the SuperSlow regime) whereas it levels off in type IID fibres (with even a light increase with the SuperSlow mode). Both fibre types significantly increase their mitochondrial content and with it their aerobic capacity. In type I fibres this is mainly due to both a highly significant increase of the intermyofibrillar mitochondria and the hypertrophy mode of resistance training. In type IID fibres both subpopulations of mitochondria contribute to the overall increase of the mitochondrial amount. Furthermore, this training effect on mitochondria may point to a fibre shift towards type IIA.

In other words, if you want to maximize your mitochondria, get up off your ever-flattening keesters my good, good friends and start pumping iron – preferably slowly and intensely.

And truth be told, whether you have T2D or not, hit the weights 1-2 times a week to pump up your mitochondria making yourself a stronger, more enduring and healthier you!