Ok. Now here is something that makes me seethe. Read it and you'll see why certain myths just won't die. Read it first before continuing to read this blog. Then come back and read a few of my comments.

And this guy is a doctor? A man who is supposed to think clearly and objectively giving you advice that can influence whether you live or die? Holy cow.

I'm sure he means well. I'm sure he thinks he's right. I'm sure he is certainly not purposefully trying to harm anyone. But his advice just might.

This posthumous interview between Dr. McDougall and Tim Russert is sort of eerie. Weird in fact. But let's take a look at the plethora of misinformation and nonsense that Dr. McDougall tosses out at us.

"And you say no one has figured out why you died of a
heart attack? One look in the mirror should have given
you a clue there was something wrong with your diet and
you were at risk. For centuries feasting like a king and
a queen has caused people to become rotund and sick—why
would you be any different?"

OK this is not so bad. If you look at a picture of Tim Russert, you can clearly see that he has metabolic syndrome. And feasting like a king or queen doesn't necessarily make you rotund and sick. It's what you eat that matters most.

"Stress, in itself, is not a toxin to the body. It is a normal natural part of life. It is a motivator to cause us to get things done and problems resolved. The major way that stress hurt you was by causing you to eat more fried chicken wings."

"Consider that in times of unthinkable
mental and emotional strain; like during the occupation
of Western Europe by the Germans throughout World War
II, people became healthier—heart disease and overweight
(two of your most notable problems)—essentially
disappeared. People during these war years were being
incarcerated, killed, and displaced from their homes and
families, yet at the same time common diseases were
vanishing. The reason for all this improved health was
the forced change in their foods—the butter, cheese, and
meat were no longer readily available during the war
years in Western Europe. People had to eat vegetables."

Assuming this story is true (which, after searching around I could not confirm), OK so they didn't have any butter, cream or meat to eat. They also didn't have candy, cakes, cookies, ice cream, processed foods, booze or cigarettes.

And because they had less total food they lost body fat and were forced to 'exercise.' But oh no, it's the lack of meat and fat that made them healthier. This doc sure is a clear thinker. I wonder how our good doctor McDougall figures we as a species were able to make it to the year 2008. According to Dr. Loren Cordain's paper titled "The paradoxical nature of hunter-gatherer diets: meat-based, yet non-atherogenic, 60% – 70% of the human diet was comprised of protein sources.

"Our analyses of both the ethnographic data (Cordain et al, 2000a) and the quantitative dietary data (Table 1) show that, even when plant food sources would have been available year round at lower latitudes, animal foods would have been the preferred energy source for the majority of worldwide hunter-gatherers. Only when it was ecologically difficult to procure animal food sources, and/or when energy-rich and easily obtainable plant foods such as the mongongo nut (in the case of the !Kung people studied by Lee, 1968) were available, did plant foods prevail in hunter-gatherer diets."

If your interested in obtaining a copy of this information, here is info:

OK, back to our story.

"Your sick arteries were caused by  malnutrition. A

deficiency of proper nutrients from
plants weakened your arteries. Your diet was almost
devoid of vegetables and fruits. At the same time, toxic
substances, like oxidized cholesterol and saturated fat,
from all the animal foods you ate damaged your
&#0
160;                     arteries. Think of pouring corrosive acid on your inner
artery surfaces at breakfast, lunch and dinner. The
result: thousands of volatile plaques, as small as the
size of a pinhead; yet the explosion of just one of them
took down a giant of a man like you, Mr. Russert."

Ladies and gents let me tell you that this statement is patently false and horribly irresponsible. I say horribly irresponsible because he is a doctor. it's one thing if a lay person says it – it is totally different story when a doctor says something like this. Terrible. Again, how on earth did humans make it to present day if eating meat was "corrosive acid" to our arteries? How do lions and wolves survive? Our digestive systems are nearly identical to the wolf. Corrosive acid my butt. It's ludicrous. And may I add there is not a single study to indicate Dr. McDougall is right. Not a one. Later in the article Russert asks if he could have been saved. McDougall's answer:

"I believe so. Even as late as a week before you died,
you could have avoided this tragedy if you had made a
serious change in your diet. Within hours your volatile
plaques would have begun to quiet down, reducing their
tendency to rupture. As soon as you had eliminated the
animal (saturated) fat from your diet your blood would
have “thinned.” Then, even if a plaque had ruptured, the
risk of forming an occluding clot would have greatly
diminished. Saturated fat makes the blood platelets
sticky and the blood-clotting proteins very active—all
leading to the easy production of a deadly blood clot.
Over the following weeks and months of healthful eating
your diseased arteries would have healed, with some
measurable reversal of the gross plaque. With the same
diet you would have lost weight, and lowered your risk
factors."

Dear lord have mercy. Where o where does this man come up with this stuff? None of this is true. This is vegan propaganda at its worst.

Thanks to Joe Anderson for the tip off to the article.

I awoke today to a Google alert that had this article on a recent study on physical activity and obesity in children.

In my new book Strong Kids Healthy Kids, I mention that in my research into the subject, physical activity did little if anything to help kids lose weight. This study seems to be another nail in the coffin for the current recommendations to get kids more active to help them lean up.

What research and my own work reveals is that weight lifting and eating right is the answer.

However, the article does mention that the active kids were healthier. Their blood pressure was better, cholesterol levels improved, insulin resistance declined, etc. after they became more active.

I raise a Mr. Spock eyebrow at this. Somehow this doesn't seem right to me. I'll try to get my hands on the actual study and report back with my findings.

But this study and other like it continue to shed light on the very real fact that physical activity is not the solution for getting kids (or anyone else for that matter) leaner.

Shabana traveled 16 hours to spend a day learning Slow Burn so that she can teach the technique to her clients.

She told me how Slow Burn has transformed her body and how she cannot wait to get her clients into shape. 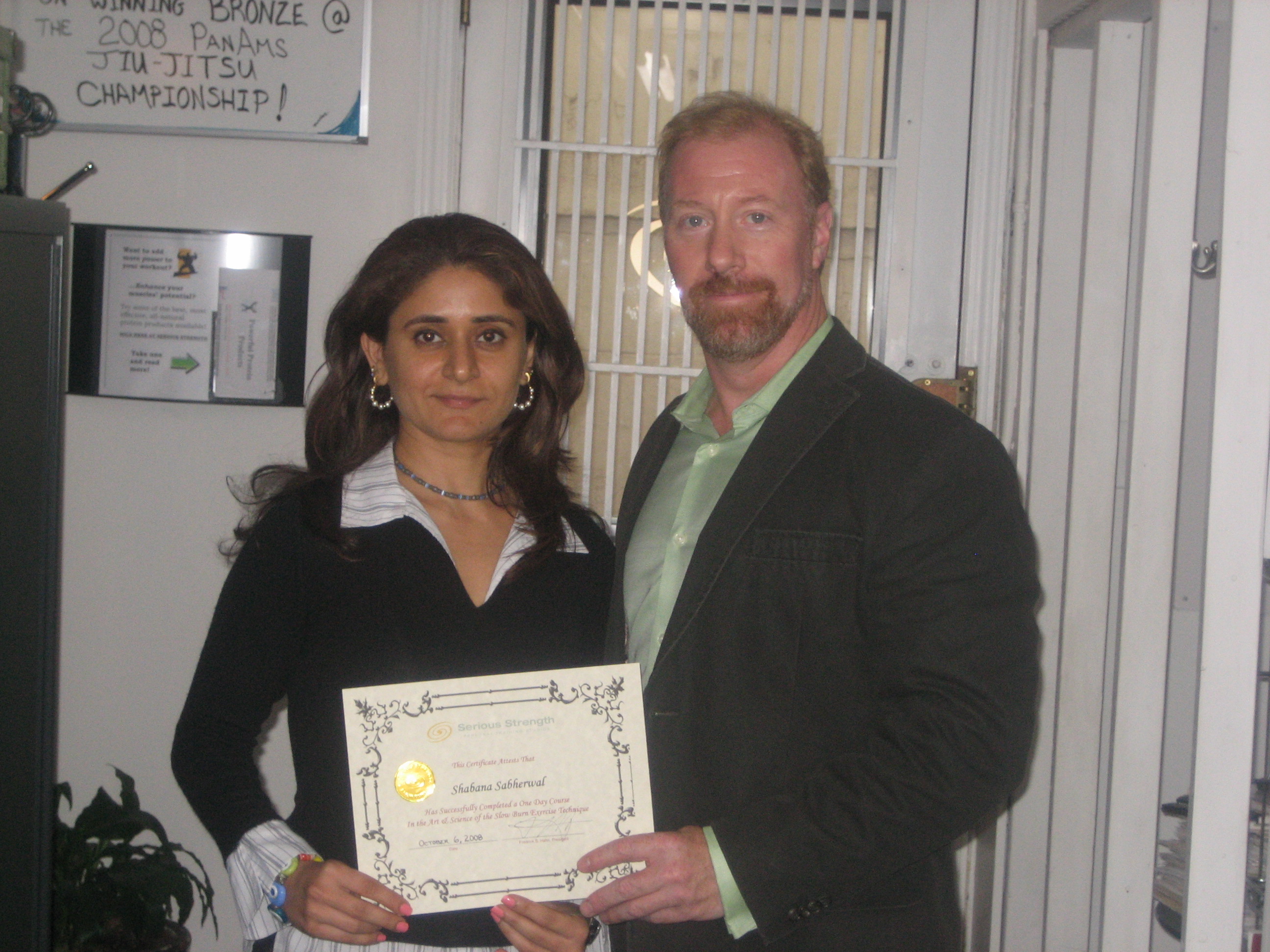