I’m sure many of you saw this article in the Times yesterday.

The absurd part was at the end in the corrections:

"Correction: January 18, 2008: A headline in Business Day on Thursday with an article about research involving two widely used cholesterol-lowering drugs misstated the issue raised by the results. It is whether using drugs to lower cholesterol at all costs is always medically effective, or even safe; there is no question that cholesterol itself can pose dangers."

Wow. Really? No question? None at all? But what if this was in fact false? What then oh, mighty Pfizer? Do you think all these people are nuts?

Fact is ladies and gents, cholesterol is needed for just about every cell function and every cell in the body can create it.

Without cholesterol, we’d be a pool of flotsam.

As far as I can tell from my reading on the subject cholesterol not only poses ZERO threat to the body but is as important as the air we breathe.

And the better quality the air, the healthier we will be. So too for cholesterol.

Taking statins to reduce cholesterol in our bodies is akin to removing oxygen from the air making it more difficult to breathe. Who would do that?  Pfizer that’s who!

I also want to say for shame on the people who take these drugs and have not yet read these books:

Well not exactly – but sorta close. Read this and you may find yourself eating more eggs and bacon before (and after) your Slow Burn workout!

If you have one, a recent study has come out showing that direct strengthening of the neck muscles significantly relieves neck pain – more so than general fitness training.

We at Serious Strength have know this for decades and have helped scores of people relieve not only their neck pain but their lower back pain as well.

Machines like this one called ‘4 way neck’ directly strengthen the muscles of the neck in flexion, extension (shown below) and lateral flexion are a godsend to many. 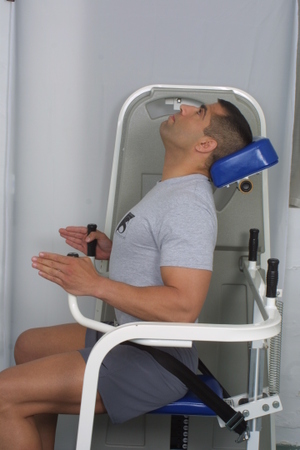 Here’s the low back exercise to give you a visual (this is an older model – we now use an even better version): 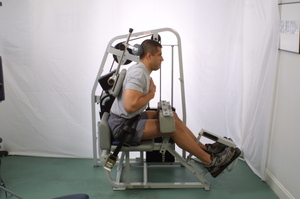 So if you have spine pain, get thee to a gym that has these devices, do them Slow Burn style for safety and better overall benefit. As little as 1 session a week will do the trick!

We had an article published in the Wall Street Journal’s online workout column by Jen Murphy today. Here it is.

Not too bad of an article, but they got a bunch of stuff wrong unfortunately.

What did they get wrong? Well for one, they said this:

"Slow Burn workouts typically consist of one set of six to 12 exercises with little rest between sets."

They got the sets rights, but the rest between sets wrong. We don’t rush from set to set. There’s no need. In fact, if a person’s heartrate is too high we let them rest until is comes back to normal.

"A single exercise could be performed as few as four times."

No. A single exercise is performed once. The repetition range may be as low as 4. Maybe they meant this but it’s not what was said.

For three, this was stated in the article:

"Proponents of a slow motion method say that it yields better results than lifting in a more traditional style."

"But there is little or no scientific data to support this claim, says Cedric Bryant, Ph.D., chief science officer for the American Council on Exercise in San Diego."

Little or no? Well, which is it -is there some or is there none herr doctor?

Truth is there are three peer reviewed and published studies showing that slow training is superior to traditional training – all three of which were conducted by Wayne Westcott, Phd who wrote the chapter on strength training for the American Council on Exercise. I guess Dr. Bryant should meet Dr. Westcott someday.

And here’s the abstract for two of them:

CONCLUSIONS: Slow training is an effective method for middle-aged and older adults to increase strength. Although studies still need to be done with at-risk populations, repetition speed should be considered when prescribing resistance training.

Perhaps I should send this along to Dr. Bryant? Odd he doesn’t know about this and, odd that he would say "little to no evidence" doncha think?

"Mr. Wright initially focused on making the muscles surrounding his rotator cuff stronger, going twice weekly for sessions with his trainer and then eventually cutting back to one day a week of strength training (most proponents of the method suggest two workouts a week)."

He never cut back to one session a week due to our say so. His schedule is so busy with his new ventures that he now can only make it to us once a week. Proponants of the method?! I created it! Why do reportes make this stuff up?

"He performs each under the supervision of Mr. Hahn, who makes sure proper form and technique are used, and that the weight load has not become too comfortable."

Well, I don’t always instruct Mr. Wright to tell you the truth – sometimes the other instructors do. And other than that, I don’t know what the rest of that sentence even means.

I find this statement funny:

"Moving weight slowly greatly reduces the effects of momentum and increases muscle tension," says Cedric Bryant, Ph.D. and the chief science officer for the American Council on Exercise in San Diego. "This may lead to greater gains in muscle strength and endurance, but little or no scientific data exists to support this claim."

It’s Dr. Bryant’s own claim!! And it’s not a claim anyway – it’s a fact of exercise physiology.

"When individuals do "slow motion" strength training, they use lighter weights than those used in traditional training."

Says Dr. Bryant. Not with Slow Burn however. Clearly he has not read my book.

"Q: Many proponents of Super Slow or Slow Burn claim two 20-30 minute sessions per week makes for a well-balanced fitness regimen and that extra cardio isn’t needed, how much truth is there to that?"

This is true. There are scores of research papers showing that strength training improves cardiovascular health. Dr. Bryant disagrees:

"With regard to the purported cardio training benefits of "slow motion" strength training, its proponents are misinterpreting the elevated heart rates resulting from such training as an adequate aerobic training stimulus," says Mr. Bryant. "While this type of training can certainly get your heart rate to increase, the increase is more a function of the high compressive loads than an increase in either metabolic demand or overall oxygen uptake."

Strength training is not metabolically demanding? And where oh where Dr. B is oxygen uptaken? In the muscles! And who was talking about slow motion training bettering the cardio system? I said that when performed properly, strength training improves the cardiovascular system and increases aerobic capacity – and it does.

The take home message here is, when you play the party game, you a party response.

I wanted to take a sec to say Happy New Year to everyone!

I also wanted to say how very grateful I am for the opportunity to help any of you who I have helped with this blog.

I receive many emails from folks who tell me how my book and the information here on this blog has helped them. That’s what it’s all about! Thank you for allowing me into your lives.

I also apologize for taking so long to blog again but my new book is due to plop into my editors graceful hands this coming Monday and there is still much to do (well not much but some).

So, I’ll be back soon blogging away on health fitness issues that I hope will help you all live stronger, longer!