I was reading one of my many books on cholesterol and it really hit me how wrong – dead wrong the concept of good and bad cholesterol is.

I am in now way the first person to say this by any stretch of the imagination. However I feel that for the sake of my clients and others who read this blog who have fallen prey to this myth and are ingesting liver damaging and muscle wasting drugs called statins I must shout this out loudly:

THERE IS NO SUCH THING AS GOOD AND BAD CHOLESTEROL.

The concept is a marketing ploy used successfully by drug companies to get you dependent on their expensive products.

And yes – doctors are just as easily persuaded by the marketing and are surprisingly unaware of the science on the issue. Shockingly unaware I should say.

So let’s think about this for a sec – if you decrease your LDL what exactly are you doing? You are in essence decreasing your bodies ability to create new, healthy cells.

Same goes for decreasing HDL. Not good. Bad, in fact.

Now, LDL proteins have essentially 2 sizes – small and large. The small particles are the ones that can get stuck inside the nooks and crannies or gaps (called the gap junction) of the vessel walls. When they get stuck they oxidize and become rancid as all non moving fats will do. Diet regulate the size of these particles. Small LDL particles, it appears, are created by a poor diet specifically ingesting foods high in sugar.

So if you think that slice of Wonder whole wheat bread or that bowl of Quaker oatmeal (sugar) is doing you and your heart some good, think again. Its just more propaganda that we’ve all fallen for. Glucose is an extremely inflammatory substance and is far more likely to cause heart disease than our friend cholesterol.

The large LDL particles are the ones that won’t get stuck and the ones we want plenty of. Eating healthfully assures this.

What this all means is, cholesterol lowering drugs are then the real demons – they are the destroyers of our health not cholesterol.

Cholesterol is our friend.

Justin is understandably miffed by all of the talk and misinformation spouted by fitness experts who falsely accuse slow training as useless for athletics. These folks contend that by training slowly with weights you will teach your muscles to move slowly and become slow.

I find this very funny for several reasons. But the one that cracks me up the most is its converse – if training slow makes you slow does training fast make you only fast? Does this mean that when you engage in an athletic endeavor that requires a slow and steady effort all you will be able to do is flail and fling your limbs about?

This would be very funny in the decent into an iron cross on the still rings (Doink, snap!), in a bowling match (whip, flingggg!) or in mountain climbing ("grab, grab, grab, grab, ahhhhhhh….")

Here is what the fast advocates mistake (and bear in mind that they criticize slow rep training without ever having tried it for any lengthy period of time and without EVER experiencing the resulting fictitious sloth like movements caused by such) – they mistake fast twitch fiber and slow twitch fiber characteristics.

Muscles fibers are a mixed bag of force producing engines. 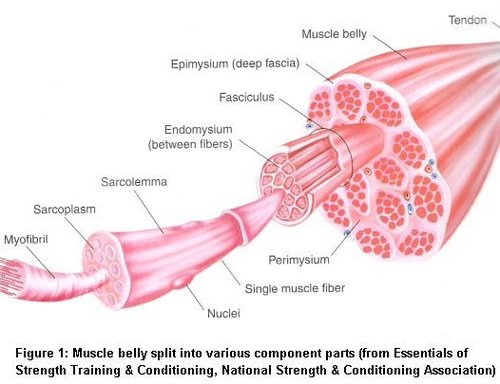 We have all sorts of fibers but they are mostly characterized by 1. Slow twitch 2. Medium twitch 3. Fast twitch. There are all sorts of sub-characteristics but for now we’ll stick to these.

OK here is the mistake – these terms fast, slow and medium refer to the fibers fatigue characteristics NOT to their ability to produce force.

IOW if a person had all red oxygen rich slow twitch fibers in her elbow flexors (biceps) she could still bend her elbow rapidly and she could do so for long periods of time. However, her ability to produce a muscular looking arm would be negligible. Her ultimate strength would also be limited as it is the white, non-oxidative, fast twitch fibers which are most responsible for strength.

And stronger muscles can make a limb move faster than it did before all other factors being equal.

Someone who has predominately fast twitch fibers will be able to move fast too and because these are the fibers most responsible for strength they will be the people who usually excel in the sports which require great speed or quickness. However, these rare folks will lack endurance comparatively. And when these folks strength train they become VERY muscular.

These fibers are recruited in an orderly fashion, slow to fast. This is an accepted tenant of exercise physiology. So when you weight train, the speed you lift has nothing to do with the fibers recruited – you will always invoke the slow twitch first, medium second and fast twitch dead last hence the importance to perform a set to deep fatigue.

Performing your reps slowly using a weight load that will render deep fatigue in ~30-90 seconds will call ALL of the fibers into play. Over time you will become stronger and stronger means faster IF you practice the sport you wish to be better at at the same time.

Training quickly with weights will also, if taken to fatigue, call upon all the fibers and make you stronger.

But training with weights quickly is a potentially dangerous game and there appears to be some physiological issues with this type of training that brings about lesser results.

Dr. John Atha, who taught at the University of Technology, Loughborough, Leicestershire, England in the department of Human Sciences wrote a paper called Strengthening Muscle which was published in Exercise and Sports Science Vol. 9, 1981. He scoured over all of the research to date on strength training techniques and had this to say on speed training:

"The balance of evidence, therefore, seems to weigh against fast-speed training as a superior method of loading.

"Second, the loading in fast movements is not a function of speed, but the effort to overcome inertia and accelerate the load. Once the required speed has been achieved, no further force is invoked. Indeed the accelerating force must soon give way to a counter force in order to decelerate and bring the fast moving load to rest. Thus the period of acceleration and hence the period of elevated loading can last for only the first part of the movement."

"Hay, Andrews and Vaughan (1980) plotted the resultant torque for the elbow for three subjects who exercised with arm curls at a slow, moderate and fast speeds and this plot showed this pattern quite clearly revealing how the torque produced by the fastest movement changed steadily from the highest initially to the lowest finally, with this changeover occurring about halfway through the movement. As fast movements are over quickly anyway, the period of elevated load intensity and hence the purportedly enhanced training stimulus must be regarded as a transient. The stimulus thus lasts too brief a period to elicit the desired strengthening response unless the load is made so heavy that a fast lift is impossible."

"In summary, rapidly accelerating a given load to achieve a fast movement increases the effective loading on a muscle but only for the brief period of acceleration. Thereafter, the loading is greatly reduced."

I am not easily impressed or won over by supplements. I’ve been taking the same quality vitamin (or so I thought) for 20 years and rarely if ever stray.

Tom Day and instructor at Serious Strength has been talking about a company and doctor for years now who helped his girlfriend (and many others) heal from a barrage of toxic insults but who remains as reclusive as a badger.

Recently he has made his products available. The website is Quantafoods. It’s a primitive, cumbersome website but you can (and should) read all about Dr. Yanick’s work and his ideas.

"Quantafood’s mission is to produce the most bioavailable and efficacious food concentrate and ferment available. In order to deliver a living bio-active whole food that is easily utilized at the cellular level and unadulterated, we have found that dry powders, capsules of dry foods or herbs and tablets fail to provide optimal nourishment. Tableting nutrients involves granulation and heat that denatures and deactivates nutrients present in the raw plant material and most powered herbs or superfoods go moldy fast having a very short shelf life."

For the first time in my life taking a supplement I have felt positive health effects. Nothing miraculous mind you, but subtle things like, waking up more rested, no hangover when I went drinking with my Greek buddy, less joint pain, less fatigue from a long day (I work 10+ hours a day nearly everyday).

What I did was shun all my previous vitamins and supplements EXCEPT for my glutamine and krill oil intake and only used Dr. Yanick’s real food supplements.

I say you should give them some consideration too. And by the way, I have no financial interest with Quanta Foods. Nada. Zippo. I just want to share a good thing.