Not all LDL particles are created equal!

That’s it! I’m sticking up for my friend poor, old LDL cholesterol (mind the pun of course. Get it – sticking up for…sticking…). From now on Dr. Oz or Ornish, if you want to bad mouth my little buddy, you’re gonna have to go through me:

Anyhow, LDL cholesterol (the so called “bad” cholesterol) the stuff that clings to your arteries like a barnacle to a pier isn’t exactly bad per se. It’s actually a good friend and serves a very useful purpose.

They look like planets or suns - the beauty of nature

Question for y’all: When was the last time your doctor told you at your yearly physical that there are sub-classes of LDL and that some are responsible for turning your arteries into sticks of solid margerine and some are not? What’s that you say? She never told you?

My doctor (sweet as she is) was completely unaware that the difference in LDL particles size mattered. All that did (and still does) matter to her was that my total LDL number was low. But a low LDL reading alone doesn’t tell you squat. You need more information.

It’s sort of like a police captain being radioed by an undercover cop that there are 20 criminals robbing a bank he’s in. The captain asks “How many of them have guns?” He replies, “I don’t know.” This lack of information forces the captain to assume that all the criminals have weaponry when maybe none do or just one does. He has to go overkill with armament and risk killing them all – some that are not killers and never have been.

You want your LDL pattern to look like this:

My pattern is similar to this but a tad more towards the A side.

Ask your doctor for a VAP test at your next physical so that you can see what your pattern is.

Truth is, without any nasty, beastly, gooey, sticky, LDL cholesterol, you’d croak. You need these little dudes in the same way you need plaster when the walls of your home get damaged. Imagine that the walls of your house could bleed when damaged and if you didn’t plaster the walls quickly enough, your house would die. But also imagine that the plaster pushes the walls a little closer together than before. Imagine this happening over and over again until you can’t get in the house. (You’ll see why I say “pushes the walls closer together” a bit later in this post.)

So, what’s good is when small, dense, LDL cholesterol comes to your rescue and “patches up” your damaged artery walls. What’s bad is when too much of this goo builds up and either A: breaks off and sends itself careening down your arteries to who knows where:

This is bad news!

or B: the build up is so great it occludes (disallows) blood flow.

This is how cholesterol actually builds up in your arteries:

See how the build up doesn’t occur on top of your arteries but rather, builds up from within? This is why I said that the walls of your house get closer together rather than the plaster building up on the outside of the walls.

However, what’s really bad, bad, bad, is when gurus like Dr. Oz and Ornish and movies like Forks Over Knives misinform you and the rest of the universe about the role LDL (and about cholesterol in general).

Dr. Oz actually said in a recent Times magazine article that a Paleo Diet can cause ketoacidosis. Incredibly, he mistakes ketosis with ketoacidosis. Tells you a lot about what he knows. I’ll be blogging on the Time article soon.

So the $64,000 question is WHY? Why is cholesterol – a substance vital to life – hell bent on killing us all? First let’s learn a bit about cholesterol. From Wiki:

Cholesterol is a waxy steroid of fat that is produced in the liver or intestines. It is used to produce hormones and cell membranes and is transported in the blood plasma of all mammals.[2] It is an essential structural component of mammalian cell membranes and is required to establish proper membrane permeability and fluidity. In addition, cholesterol is an important component for the manufacture of bile acids, steroid hormones, and vitamin D.

Yeah, it sure is bad stuff.

So, why does it sneak around looking to settle in our arteries attempting to kill us? Is it angry that we ate it? Some gurus say well, sure – cholesterol is an important substance but eating too much of it is no good. Really? I didn’t know that when too much is eaten, it sails through your body of blood like a Spanish Galleon looking to land and stake claim on the continent of Artery. If that were the case, Atkiners would be dropping like flies in the middle of the street on a daily basis.

And what about the vegans and vegetarians that get heart attacks and heart disease? They do you know. Oh yes, I forgot – it’s just their genetics. They’d have died even sooner had they not adopted a plant-based diet. (Well, not plant based – plant only diet. It’s a sneaky little term “plant-based.”) Yeah, right.

Speaking of vegans, here’s a pic of President Clinton when he was eating plenty of cell-building cholesterol:

Here’s a pic of him now, bereft of dietary cholesterol: 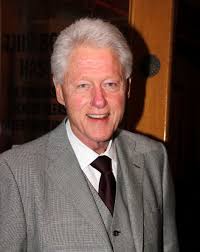 But of course, the zeitgeist that fat and cholesterol are evil is so deeply embedded in his brain, even looking at himself in the mirror and seeing that he’s a shadow of his former self isn’t enough to wake him up and smell the lipids. Sigh.

Anything that causes damage to your artery walls gives your body a reason to create SDLDL (small dense LDL) and send them on their merry way to fix the problem.

You can’t blame policemen for riots or firemen for fires.

Doctors who give you drugs to keep your liver and intestines from making LDL cholesterol are like mayors firing their policemen to handle crime better or laying off their firemen to stop fires.

Yes, it’s better to have very little small, dense LDL floating around inside your body. But it’s only better if you are taking measures to keep your body from needing these particles. Capeesh?

So, stop smoking. Stop drinking like a fish. Handle your stress better. Eat a real food, fat-based diet. (Wait I think I coined a phrase there…). Research shows that a low carb, real food diet alters the LDL particle size/pattern from SDLDL to LBLDL. Why? ‘Cuz it’s a healthful way to eat that significantly decreases systemic stress and inflammation that’s why!

So the next time you hear Dr. Oz, Ornish and all the other cholesterol bullies spouting their vitriol against our little friend, tell them to stick it .